Doug Simpson is a retired high school teacher who has turned his talents to writing. He has a new non-fiction book titled We Lived In Atlantis. This is Our Story, an additional non-fiction book titled The Soul of Jesus and nine fiction novels published including: The Deja Vu House, and Book I - Book V of the Dacque Chronicles. See details of his books below. 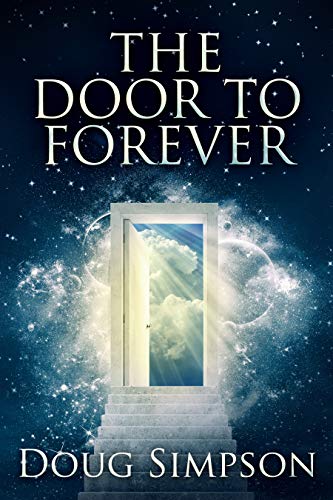 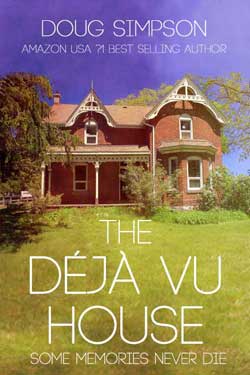 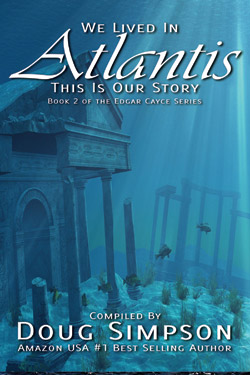 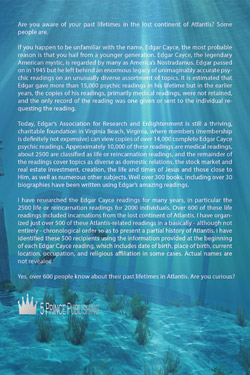 A REASON TO LIVE.

After recently widowed Chelyan and famous TV reporter Mel bump into each other, their friendship blossoms quickly.

Both avid walkers, they decide to take a stroll together each morning. When Chelyan reveals that her husband's death was actually a murder, Mel is eager to dig deeper into the case.

Beginning their own murder investigation, the amateur sleuths are in for some startling surprises. But can they piece together the clues and bring the killer to justice?

Buy  A Reason to Live by Doug Simpson.

THE DOOR TO FOREVER.

His story begins at a young age, with his first visit from a spirit playmate his own age. To John, Jason is just an ordinary child like him, and John never gave much thought to where Jason came from - or where he disappeared.

As years passed by, more playmates followed, and as John got older, his playmates shared more and more information about the spirit world with him.

In The Door To Forever, John recounts the various encounters he, his family, and close friends experienced with spirits, spirit guides, earthbound spirits, haunted houses, and visits to Heaven, as well as soul groups and the purpose of their souls reincarnating together over many lifetimes to collectively advance their soul development in order to reacquire their original, perfect state when God created them.

Buy  The Door To Forever by Doug Simpson on Amazon now.

Listening to the chatter of her six-year-old daughter, Cammi, Connie Cantland begins to wonder if Cammi’s imaginary friend could be more than just imaginary.

Connie knows her friend and coworker, Dani, believes in the survival of souls after the death of bodies, and the reincarnation of souls, so she shares her concerns with Dani about Cammi’s supposed friend. Dani introduces Connie to Dacque LaRose: a friend and mentor on souls and reincarnation.

Connie and Dacque’s conversations propel Connie and her husband Carson into an educational journey into reincarnation of souls, soul groups, past life regression sessions, spirit guides, and conversations with souls, of which Connie and Carson previously had absolutely no knowledge of.

The century-old farm house that caught Vic’s attention was on a large lot on the outskirts of Cattleton. Pam stood mesmerized next to the car as Vic and the real estate agent walked towards the front door. Noticing Pam’s absence before they entered the house, Vic asked Pam if there was a problem.Even though Pam had never been to Cattleton in her life, she replied, “I know this house.”

WE LIVED IN ATLANTIS. This is our story.

Are you aware of your past lifetimes in the lost continent of Atlantis? Some people are.

If you happen to be unfamiliar with the name, Edgar Cayce, the most probable reason is that you hail from a younger generation.  Edgar Cayce, the legendary American mystic, is regarded by many as America’s Nostradamus. Edger passed on in 1945 but he left behind an enormous legacy of unimaginably accurate psychic readings on an unusually diverse assortment of topics.  It is estimated that Edgar gave more than 15,000 psychic readings in his lifetime but in the earlier years the copies of his readings, primarily medical readings, were not retained, and the only record of the reading was given or sent to the individual requesting the reading.

Today, Edgar’s Association for Research and Enlightenment is still a thriving, charitable foundation in Virginia Beach, Virginia, where members (membership is definitely not expensive) can view copies of over 14,000 complete Edgar Cayce psychic readings.  Approximately 10,000 of these readings are medical readings, about 2500 are classified as life or reincarnation readings, and the remainder of the readings cover topics as diverse as domestic relations, the stock market and real estate investment, creation, the life and times of Jesus and those close to Him, as well as numerous other subjects. Well over 300 books, including over 30 biographies have been written using Edgar’s amazing readings.

I have researched the Edgar Cayce readings for many years, in particular the 2500 life or reincarnation readings for 2000 individuals. Over 600 of these life readings included incarnations from the lost continent of Atlantis. I have organized just over 500 of these Atlantis-related readings in a basically although not entirely chronological order so as to present a partial history of Atlantis. I have identified these 500 recipients using the information provided at the beginning of each Edgar Cayce reading, which includes date of birth, place of birth, current location, occupation, and religious affiliation in some cases. Actual names are not revealed.

Yes, over 600 people know about their past lifetimes in Atlantis. Are you curious?

Buy  We Lived in Atlantis by Doug Simpson on sale now at Amazon.com, iTunes and Kobo. 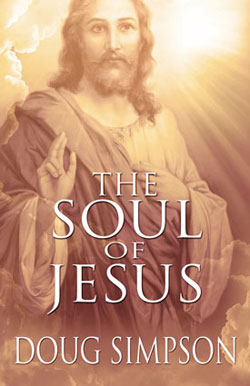 THE SOUL OF JESUS.

As part of His preparations for the long-prophesied birth of our Savior, God selected a devout group of primarily Jewish Essenes to oversee this monumental undertaking. The Soul of Jesus delves into numerous details surrounding these readily-available but little-known preparations which preceded the birth of Jesus, and then carries on to share delightful snippets concerning the birth and life of Jesus before the commencing of His Ministry, Jesus’ Healings and other Miracles, His Apostles, relatives, friends and the group of seventy disciples, the Crucifixion and Resurrection, His activities after the Resurrection, and Jesus’ Ascension, that are not recorded in the Scriptures. 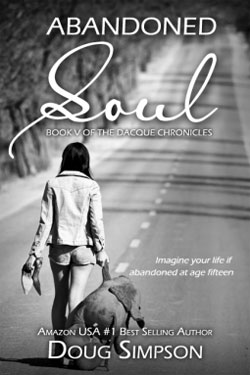 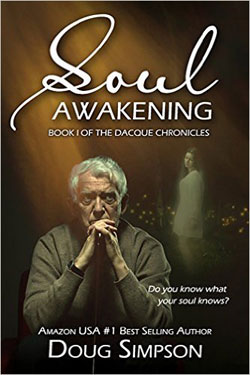 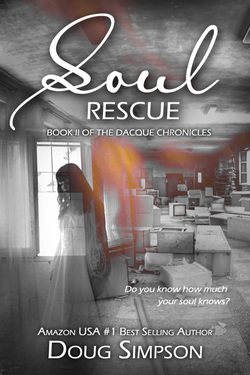 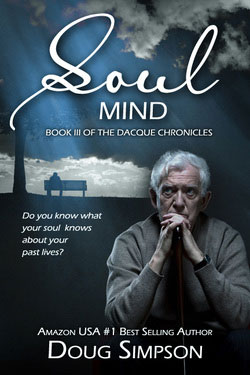 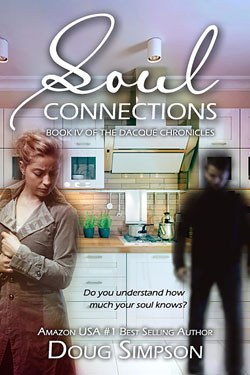 She was abandoned by her father at age seven. The child care workers seized her at age fifteen when her mother ran afoul of the law. Her first two foster care placements were terminated after sexual harassment incidents. On a spur-of-the-moment whim she and her foster care buddy hid in the back of an almost loaded moving van. Six hours later, still fifteen years old, she was a runaway, homeless street person in a city she never even knew the name of. Soup Kitchens and Downtown Missions became her new homes. She used the alias, Mary Smith, so the authorities would be less likely to find out her real identity and return her back north where she hailed from. As the weather turned colder, she and her buddy hitchhiked further south. She never knew why but her buddy, her only real friend, then disappeared from her life. She was sixteen and alone. Her life consisted of surviving one day at a time. There was no use even thinking about a future, but then a miracle happened.
Buy  Abandoned Soul by Doug Simpson on Amazon.com.

SOUL AWAKENING, BOOK I of the DACQUE CHRONICLES

Soul Awakening is a work of fiction, inspired by a series of actual events. It is a spiritual mystery/romance involving the 'accidental' meeting of three total strangers and their ultimate discovery that they shared previous lifetimes together. As you read Soul Awakening, you will realize that the connection of the characters is orchestrated by Divine Intervention. It delves into reincarnation, past lifetimes, spirit communication, messages from God, past-life regression sessions, Guardian Angels, past-life recall in the awake state, and soul attraction, which is the reincarnation of groups of souls together, in more than one lifetime, in order to deal with uncompleted Karmic connections from previous incarnations together.
Buy Soul Awakening by Doug Simpson on Amazon.com.

In Dacque LaRose's latest adventure he is directed to the local children’s hospital to locate and assist the earth-bound spirits of five children stranded for many decades. Dacque is a very unusual Good Samaritan selected by the Heavenly Powers to assist Them in rescuing deserving souls, departed or in human bodies. Dacque’s soul has earned this exalted position as God’s helper through his exemplary actions over numerous incarnations.

To assist Dacque in carrying out these noble duties, he has been bestowed with unique powers, allowing him to see and converse with spirits as well as receive direct Heavenly messages. Dacque is rewarded with three touching personal relationships throughout this adventure and a totally unanticipated surprise at the conclusion of his Heavenly assignment. Soul Rescue is a fictional novel inspired by a series of actual events.
Buy Soul Rescue by Doug Simpson on Amazon.com.

Dacque LaRose was accustomed to being visited by and communicating with disembodied spirits as he carried out his occasional Heavenly assignments. His latest spirit visit went miles beyond anything he would have ever imagined. The spirit of a former acquaintance, and recent murder victim, joined Dacque one morning on his favorite park bench and asked him to assist in solving his murder. The local authorities were getting nowhere due to a lack of any substantial evidence in the case. Dacque had absolutely no idea how he could be of assistance in solving a murder, but he was accustomed to receiving his Heavenly assignments one installment at a time. He knew the steps he would be expected to follow would appear in due course. Dacque’s new assignment proved exciting, and educational, as the spirit of the murdered acquaintance gladly explained to Dacque, and his detective friend, the inner workings of the Soul Mind or subconscious mind.

Soul Connections is the fourth book in the exciting series titled the Dacque Chronicles.

Follow the educational journey of a group of individuals as they investigate their interconnected past lifetimes. Guided by the spirit of a sudden murder victim, Dacque and his friends uncover the knowledge retained by their souls after death.

Do you know what your soul planned for you in this lifetime, before you were born? You should!